I began shooting IR in early 2000 with a Tiffen filter on the front of my Nikon digicam lens. In 2002, after reading a very interesting article by James Wooten called “Removing the IR Blocking Filter or How to Ruin Your New Camera,” I moved to the next level and converted my camera for IR only. The idea was if you removed the internal IR blocking filter you would improve the performance of your camera by increasing the speed. A typical shutter speed for an unmodified camera (with a filter screwed in front of the lens) was 1/8th second. With the internal filter removed it would be a speedy 1/250th. Mr. Wooten went on to say that modifying a camera was a very risky endeavor. You could ruin a perfectly good camera! But the results would be worth it if you succeeded. A tripod would no longer be necessary, and all sorts of moving subjects could be frozen at will. Mr. Wooten went on to demonstrate how to remove the IR blocking filter and replace it with a piece of clear glass. He speculated that “it would be interesting to put a visual blocking (IR) filter in there.” I agreed, and when I converted my Nikon 4500, that’s exactly what I did. As far as I know, I was the first photographer to replace the blocking filter with not a clear, but an actual piece of IR glass. As a result, the camera could only shoot IR, but no external filter would be needed. I could use my lens attachments; fisheye, wide converter, and tele converter, on the lens where the old screw on IR filter used to be. This expanded my creative potential exponentially and for me, a new art form was born. High speed digital near-infrared photography.

Sometimes infrared is used as a gimmick to make an boring scene interesting, but I like to use to to make an interesting scene even more interesting. IR has a contrast and clarity ordinary B&W does not enjoy. It has forced me to see things in a new way and that has sparked my creativity and growth as a photographer. Visualizing a scene in my mind’s eye in IR and accessing how things will look and then deciding if the effect is appropriate for that scene is a fascinating process. Once you start you look at everything this way. Even without a camera, you wonder to yourself, how would that tree look in IR? With the sun behind it like it is now, would glow like it had ice on its leaves? That would be so cool! You smile realizing everything is new again. 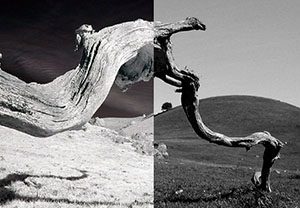